Electors’ Gallery in the lower passage

Electors’ Gallery in the lower passage

Although the town of Trarbach as the administration of the “Hintere Grafschaft Sponheim” never belonged to the electors’ government of Trier (and became protestant after the reformation) the Mittelmosel-Museum possesses eight rare portraits of former archbishops of Trier. Up to the French Revolution, these archbishops were not only the rulers of the church but also of the country of

Eifel and Moselle regions from Trier to Koblenz. As archbishops they were also entitled to elect the German emperors.

The electors’ gallery with three contemporary paintings of the 18th century as well as some portraits of the 19th century, painted posthumously come from the inheritance of the local judge Clemens Gescher (he died in 1932) whose wife belonged to an old civil servant family of Koblenz.

The portrait of Clemens Wenzelslaus (1739-1812) is of special significance. Experts declare it to be a most perfect portrait of the last elector of Trier. This portrait is said to have been painted by Heinrich Foelix (1732-1803). Unfortunately it was cut into pieces during the revolutionary troubles.

The portrait from 1882 showing Richard von Greiffenklaus (1467-1531) is a rarity, too, as there are only two more posthumous paintings of this elector. Gustav Zick (1809-1886) is the artist; he was the grandson of the well-known baroque painter Januarius Zick from Trier. 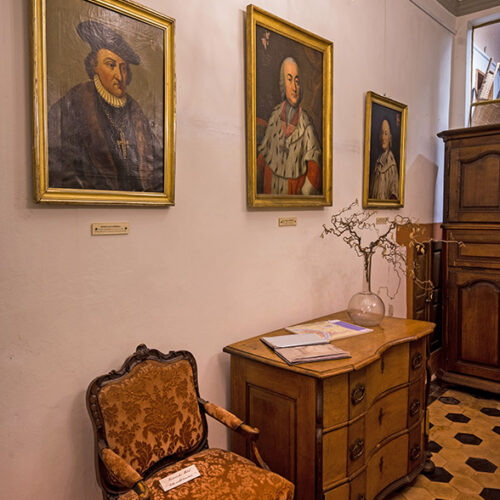