In about 1750 the baroque villa Böcking was built by the wealthy merchant Johann Adolf Böcking ( 1695-1770 ) It is said that it was erected in the baroque style of Trier on the basis of plans by Oberbaurat Christian Ludwig Hauth ( 1726- 1806). He was the son-in-law of the builder. Until the beginning of the 20th century this villa was for six generations the prestigious home of the Böcking family. This family whose founder had among others an important position with the dukes of Zweibrücken, pursued a very clever marriage policy. The Böckings had family connections with the merchant families Scheibler (Monschau), Hölterhoff (Bad Honnef) and Karcher (Saarbrücken) as well as with industrial dynasties Krupp (Essen) and Stumm (Saarland). For instance the founding capital of the international company Villeroy & Boch came to a significant part from the dowry of a granddaughter of the builder. Villeroy& Boch still exists today.

The reputation of the Böcking family was reflected by the guests of the villa. Johann Wolfgang Goethe was welcomed there by the grandson of the founder after his daring trip on the Moselle river. Goethe returned from the battle fields of the so-called French campaign in November 1792. In 1837 the Prussian crown prince who became later King Friedrich-Wilhelm IV also stayed as a guest in this villa. The gold-plated splendour vase by KPM is still one of the striking exhibits of the museum. This vase was the present of the crown prince to the Böcking family.

Moreover, the French poet Guillaume Apollinaire, a friend of Picasso in his younger years, stayed there in 1902. For two years he had been a private teacher of relatives of the Böcking family in Bad Honnef.

In 1963 the town of Traben-Trarbach bought the villa from the Böcking family in order to give there the Mittelmosel-Museum a home. For some decades this villa had been converted into rented flats. The two floors offered accommodation for four families. 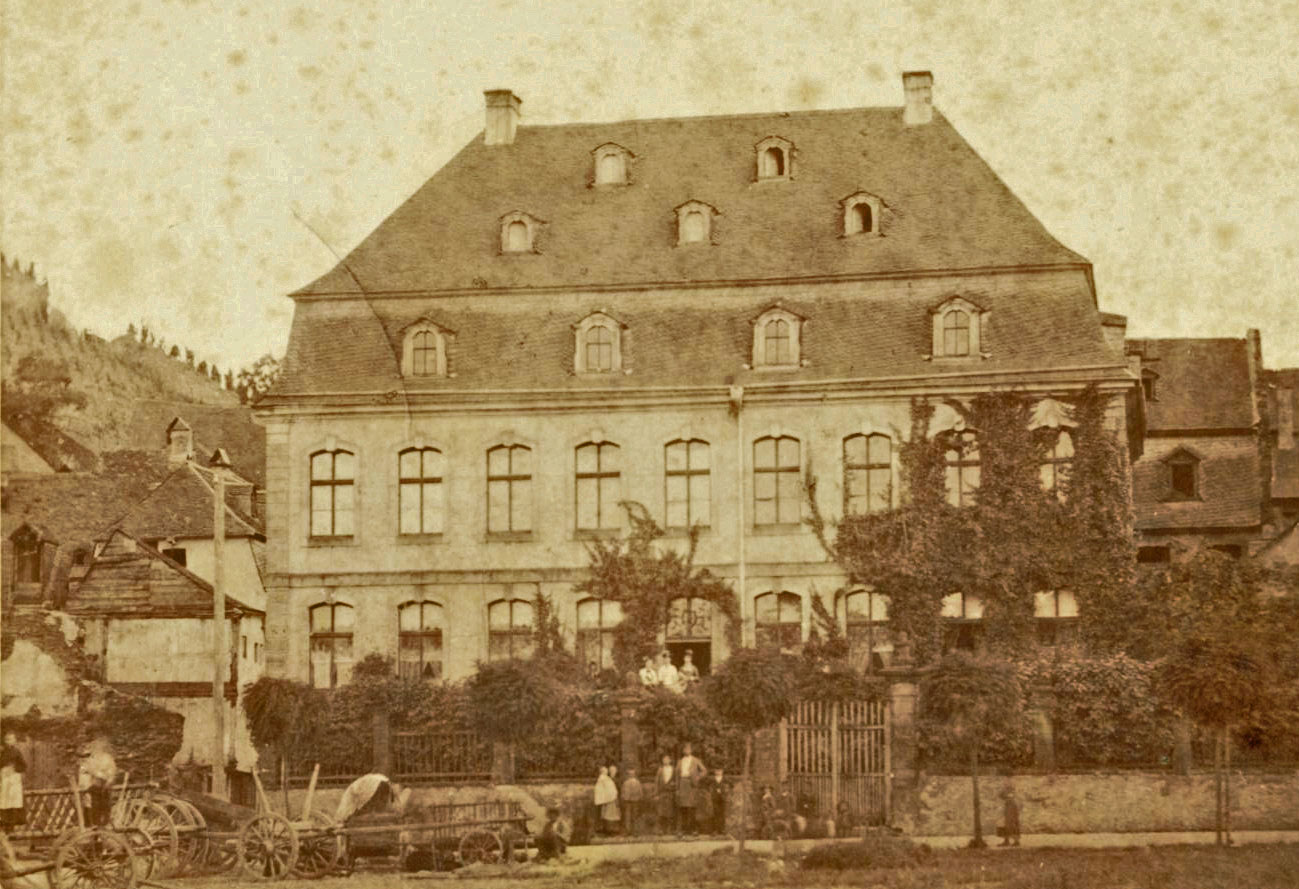 The history of this museum is inextricably linked the life and the activities of Dr. Ernst Willen Spies (1898-1975).Dr. Spies whose family used to do business in Russia in the second half of the 19th century settled down in Traben-Trarbach right before World War one broke out.

Dr. Spies dedicated all his life to the research and conservation of the history of his home town. He began very early to collect pieces of this past. Already in 1928 he organized a first historical exhibition in the town hall of Traben-Trarbach where he was supported by many private donators. This town hall had been for ten years the location of the temporary museum. Soon this location became too small for the exhibition. The town bought in 1937 the so-called “Kommandanten-Haus” on the banks of the Moselle river. The exhibition was then extended to a district museum initiated by the district of Zell to which Traben-Trarbach belonged in those times. The opening of the new museum, however, was prevented by the outbreak of World War two. Dr. Spies was forced to fight in this war from its very beginning. In 1946 he returned to Traben-Trarbach, having been a prisoner of war of the Americans. He immediately started repairing the damages to the building and the collection itself. In 1948 the museum was opened to the public on a temporary basis.

In 1951 the museum could at last be opened regularly. In the meantime, however, Dr. Spies had considerably enlarged the number of exhibits as he was a tireless collector. Only a few years later the museum moved to Trarbach into the impressive building of the Böcking family of merchants. In 1955, even before the negotiations for buying the building were finished and before all the tenants had moved out, the first exhibits of the collection were shown on the attic. In the following years the museum had two locations. It was only in 1969, when the villa had been completely renovated that the Mittelmosel-Museum could open its doors. In 1975 when the founder of the museum suddenly died from an accident, a new chapter of this museum was opened. Since February 2001 it had been run and is still run by Dr. Christof Krieger, a local historian from Wolf, a community of Traben-Trarbach.