Family gallery in the staircase

Family gallery in the staircase

Apart from the big painting of Eleonore Hölterhoff (1805-1868), the youngest daughter of Goethe’s host Ludwig Böcking, all family portraits were made by the history painter Joseph Schex (1810-1911) from Düsseldorf. At the age of sixteen, Schex had already been admitted as a student of the elementary course of the Düsseldorf art academy. He married in 1868 Eleonore Böcking (1827-1911) as his second wife. She was the niece and godchild of Eleonore Hölterhoff.

The oil painting which he made already in 1857, showing his wife to be as a thirty-year-old woman is a proof that the couple got to know each other already eleven years before their marriage. Maybe the social gap between the wealthy daughter of a merchant and the painter (whose first wife had already died in November 1857) was an obstacle to an earlier marriage. Indeed, they got only married two years after the death of Eleonore’ father. The couple did not have any children.

Apart from the small oval portrait of his wife, the other two portraits in the staircase show Eleonore’s younger brother Adolf Böcking (1834-1903) and the latter’s wife Louise Böcking née Rumpel (1841-1887).

You will find a self-portrait of Joseph Schex in the dining room of the baroque villa Böcking. It might be interesting to know that the painter was awarded a medal for his art at the international exhibition in Vienna in 1873. 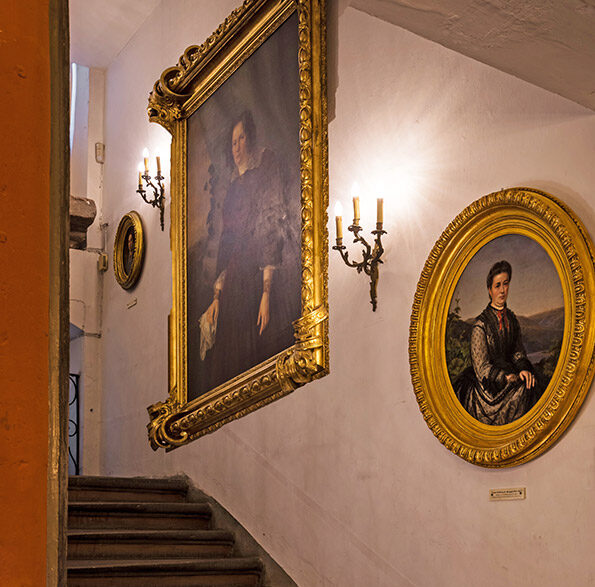