This room or “upper room” as it is called in the old family documents has always been the official room in the Böcking villa. It was originally decorated by a hand-made wall paper, but after the marriage of the house builder’s grandson Ludwig Böcking in 1788, it looked like it looks today.

The room is dominated by a precious landscape wall paper which was probably made be a manufacturer from Frankfurt. It was inspired by a poem with the title “spring” by Ewald Christian von Kleist and it was painted by several unknown artists with oil on canvas. It shows a romantic fancy landscape.

The two elaborate console tables, the mirrors as well as the three chairs and the canapé on the left are part of the original furniture in the late Louis Seize style.

It can easily be presumed that a few years later Johann Wolfgang von Goethe was welcomed in this costly renovated room after his dangerous journey on the Moselle River in 1792.

The piano forte, built in 1811 by Anna Maria (“Nannette”) Streicher (1769-1833) is one of the most precious exhibits of the Mittelmosel-Museum. You can find it in the middle of the room. Born in Augsburg, she was the only woman among 180 colleagues to have her own workshop in Vienna. As a daughter of Johann Andreas Stein (1728-1792) who invented the “German mechanics” of the piano building, the instruments developed by her belong to the most innovative and best of her time.

The few “Streicher” pianos still existing today are mostly shown in the big museums of the world. The only piano forte from 1811 which still exists can be found in the “Germanischen Nationalmuseum” in Nuremberg. In the Goethe house in Weimar you can discover one in the so-called “Junozimmer”. It was also built by Nannette Streicher’s workshop, but it is ten years younger.

Moreover, this woman was all her life a close friend of Ludwig van Beethoven. She did not only exchange letters with him, but also built pianos for him. Therefore it is not unlikely that this famous composer personally saw this piano forte and even played on it. It is interesting to know that one of Beethoven’s great-grandfathers from his mother’s family was born in Rissbach/ Traben.

The piano forte was renovated in 1989 with the support of a generous donator. In 2011 on the occasion of the 200th anniversary it was completely restored so that today this instrument is very much like the original one and is regularly played in concerts.

Another interesting exhibit in this room is a Lyra guitar of 1810.This rare and extremely precious instrument was built in the workshop of the famous Italian guitar builder Gaetano Vinaccia from Naples. 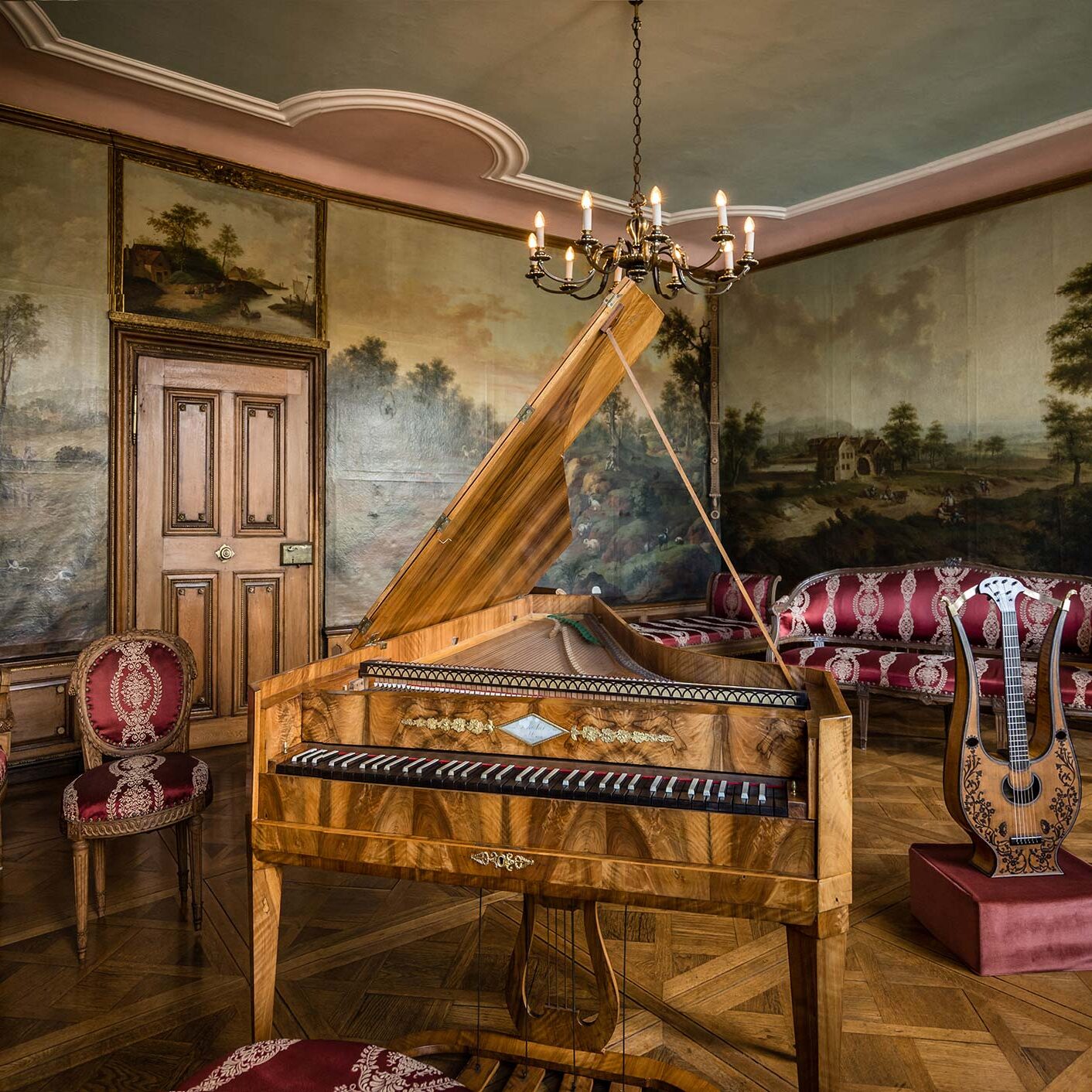